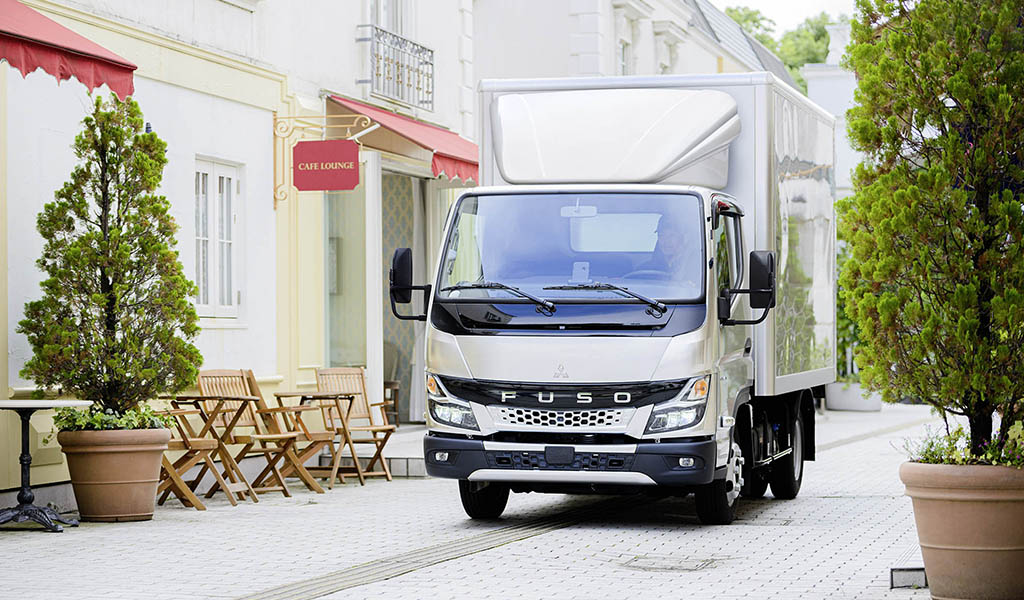 The new Canter features a revised face that combines historical brand cues with a modern design language, connecting form to the functionality of a solid light-duty truck. It also reflects FUSO’s Black Belt design identity, which runs through other vehicles of the Japanese brand’s global product range. The sleek lines of the cabin integrate optional LED headlights and represent a technological and conceptual update after ten years.

The new Canter can now be ordered with the advanced safety feature Sideguard Assist®. This detects moving vulnerable road users on the passenger side of the truck through radar sensors. The system emits alerts if it detects any risk of collision when the driver is steering towards the passenger side or has applied the left-turn indicator. The previous model featured Advanced Emergency Braking System (AEBS), Electronic Stability Program (ESP®) and Lane Departure Warning System (LDWS); Sideguard Assist now provides further safety support. Other enhancements include optional LED headlights with 30% better visibility, a new Autolight function, and reinforced rear underrun protection that minimises the impact in the event of an accident.

Over the past decades, FUSO has made continuous improvements to its light-duty truck to meet customer needs. Thanks to improved insulation, the new Canter has an impressively low interior noise level. The spacious cab with good all-around visibility allows the driver to manoeuvre easily in the city. The Canter’s low entry height and easy cross-cab access is designed to support truck drivers, especially those engaged in the distribution business.

Multifunctional, the FUSO Canter is optimised to challenge urban traffic environments but with a high axle, twin rear wheels and 3.5t – 8.55t varieties, the truck can also stand the multi terrains for construction haulage. Exhaust gases are cleaned by a combination of oxidation catalytic converter and diesel particulate filter. Along with BlueTec® 6, the technology ensures all Canter models comply with the Euro VI standard. The front axle features independent suspension for a smoother journey, and allows for rapid shifting without power loss thanks to Duonic transmission technology.

The FUSO is the perfect alternative to the Nissan cabstar, Nissan nt400 and the Isuzu Grafter that comes with the support of Mercedes-Benz. Confused as to why we don't call it the Mitsubishi Canter? Scroll to the bottom for some history on the Canter and why Mercedes-Benz sell them.

A FUSO Canter For Every Need

More space. Unrivalled manoeuvrability. Increased wheelbase. Canter is rewriting the rulebook on what a 3.5t can do.

Whether its a building site in the city or a remote rural location - The Canter 6.5t 4x4 keeps you firmly on the ground

The class-leading 7.5t simply does what others can’t. A greater payload of over a tonne more than most competitors, this Canter redefines the market and is still to be matched.

Big things. Small Packages. The definition of the Canter 8.55t. A payload that matches any 10t truck, this Canter can go where others can’t. Proving that size doesn’t matter.

Reduced fuel efficiency, with no catches. Save fuel when on the road with the Canter Eco-Hybrid’s drive system – and recharge with a brake.

The FUSO Canter quality extends not only to new vehicles, but to approved used trucks too. Benefit from a used Canter, with the same customer care as new.

The Canter is big on comfort, everything is tailored to the driver‘s and co-driver‘s comfort needs. the well-sprung, noise insulated cab makes longer journeys just as pleasant as shorts trips.

The interior is impressively spacious, with room for three people and up to seven in the crew cab.

Everything Within Easy Reach

Ergonomically arranged stowage facilities & LED lighting on the roof provide a neat & tidy interior. The adjustable steering wheel and multi-function Levers can be positioned according to the drivers individual height, ensuring everything is in easy reach.

If you're involved in delivery work and have to get in and out frequently, you'll appreciate the low entrance, which only has one step.

Its functional operating system makes work as easy and comfortable as possible. From automatic or manual air conditioning to standard-specification Eco Mode and Hill Start Assist.

All technical refinements within the system are deployed by clearly marked, easy-to-use controls. 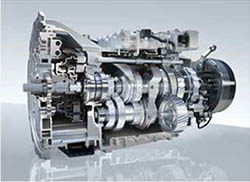 All engine variants have a closed, maintenance-free diesel particulate filter which regenerates itself automatically. Cooled exhaust gas recirculation (EGR), an oxidation catalytic converter and a particulate filter combine to clean the exhaust emissions.

The 3.5t model with exhaust gas recirculation (EGR) and diesel particulate filter (DPF) complies with the Euro 5b+ standard.

Models from 6.5 to 8.55t meet the new Euro VI standard with EGR, DPF and, in addition, BlueTec® 6 (selective catalytic reduction). 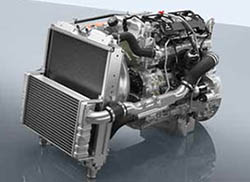 Provided as standard with a revolutionary Duonic dual-clutch transmission – the first truck to feature this ground-breaking transmission which features Eco Mode as standard.

The direct-shift transmission causes less wear to auxiliary equipment, reduces the burden on the driver, particularly on short trips, and combines the convenience benefits of an automatic transmission with the economy of a manual transmission. 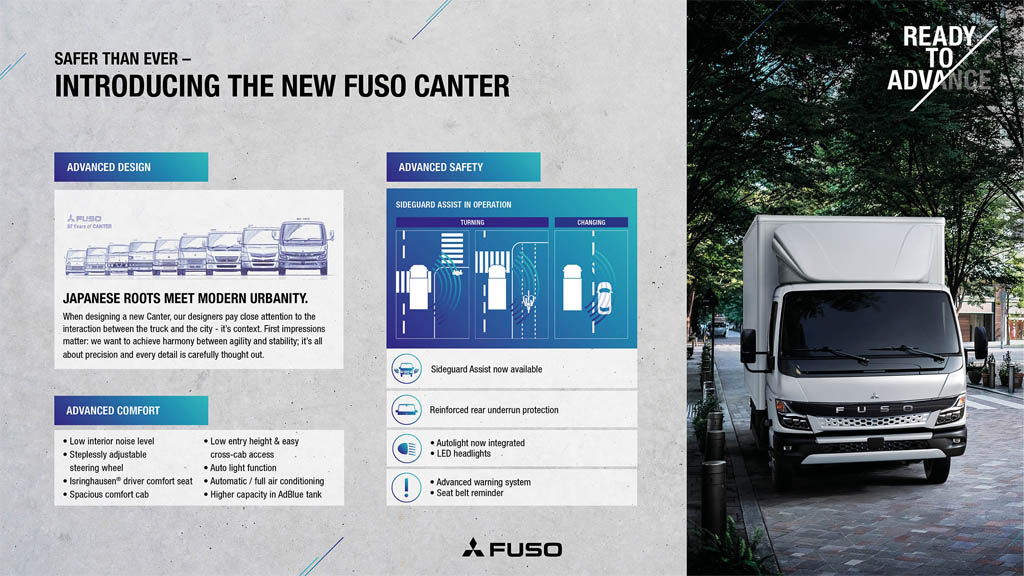 Is that Not a Mitsubishi Canter?

Do you not call it a Mitsubishi Canter? Unfortunately, not really. Some people are maybe confused about why Northside are selling a product with the Mitsubishi logo, who FUSO are as a brand and what the connection with Mercedes-Benz really means.

A lot of people tend to call the Canter a Mitsubishi Canter, rather than a FUSO Canter. Heres a a little history on the FUSO Brand:

Mitsubishi Motors owns 10.7% of Mitsubishi FUSO Truck & Bus Corporation (MFTBC), the company that makes vehicles under the FUSO brand worldwide. The other 89.3% is owned by Daimler, who acquired the majority share in 2001.

Mitsubishi translates to ‘three diamonds’. The three-diamond badge has been the logo of the Mitsubishi Group for over 100 years. It has come to be a symbol of quality for the FUSO brand, rather than just the Mitsubishi logo, and because of this, we continue to proudly display the logo on our FUSO products in many countries.

BUT JUST HOW BIG IS FUSO CANTER?

We want to make it really clear to our customers that FUSO is the brand, Canter is the truck and Mercedes-Benz are the network that support this product within the UK.

Mercedes-Benz and FUSO are partners and by buying a Canter, customers are getting the full support that comes with the Mercedes-Benz network.

So the next time someone says that is a Mitsubishi Canter, you can tell them no, that its a FUSO Canter! And it comes with the support of Mercedes-Benz.

Northside have a dedicated team of specialists to deal with any fleet request, no matter how big or small our team can help. Speak with one of our team today to discuss your needs as a business, and how Northside can keep your fleet moving.

Need an answer Now? get in touch for a no obligation chat

Want us to call you back? Fill out our call back form by  clicking here

If you would like to discuss your business needs face to face, simply call into one of our showrooms or we can arrange to come visit you, simply send us an email or give us a call to arrange a time suitable for you.

We value your privacy. We use technology such as cookies on our site to personalize content and ads, provide social media features, and analyse our traffic.